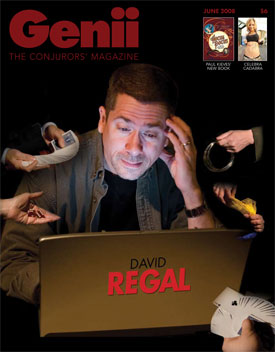 DAVID REGAL has written for television series ranging from Rugrats to Everybody Loves Raymond and co-wrote the Lionsgate feature Angel of Mine. In addition, he has authored several highly regarded books of magic theory and methods – routines of his design have been seen by millions of people around the globe. He recently served as head writer/co-executive producer of TV’s The Carbonaro Effect, where, over the course of six years, he created and collaborated on literally hundreds of original effects.

David has received the Genesis Award, twice been named Lecturer of the Year by the Academy of Magical Arts (the parent organization of the Magic Castle), and is the recipient of the AMA’s Creative Fellowship.