And we now have a limited supply of DELUXE SETS. These come with – in addition to the gold-plated set – a gimmicked SILVER ring, for those who wish to have that extra option. The silver ring is the one of my design that is gimmicked with magnetic components. 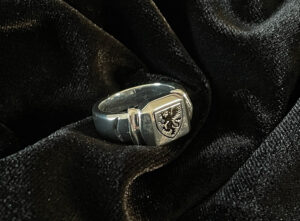 The Linking Finger Rings is, simply, one of the great effects of magic. Invented by Persi Diaconis around 1960 and marketed by Richard Himber, it’s the rare sort of effect that captures an audience’s imagination:

Three rings are borrowed. The magician proceeds to link them together into a chain of three. He then unlinks them and returns them to their owners.

Over the years I have been impressed with some of the machining I’ve seen put into other marketed versions of the gimmick. But I would look at it and think: This is clever, but it wasn’t designed for actually performing The Linking Finger Rings.

My preferred gimmick is included in this set. It was designed for the performance of this classic effect. What you want in your gimmick is:

The unique gimmick does all of the above. In a routine of magic often tarnished by excess “fiddling,” undesired moves have been eliminated.

What is new about this release?

First: Quality. My previous manufacturer’s output had too much variance – as a result I discarded a large percentage of every run. Last year I commissioned samples from an assortment of different suppliers and I went with the best.

Third, the price. My gold-plated sets have sold for $300 for many years. Thanks to the reduction of waste, I am reducing the price of the new run, for the time being, to $195. The set includes:

I only use one gimmick for my routine. The other gimmicks are included to make the set complete, so the purchaser can perform any version of The Linking Finger Rings that he or she desires.

I am now able to offer SIGNED COPIES of my book INTERPRETING MAGIC. Over 500 pages, full color photos, and…Genii Magazine“A…