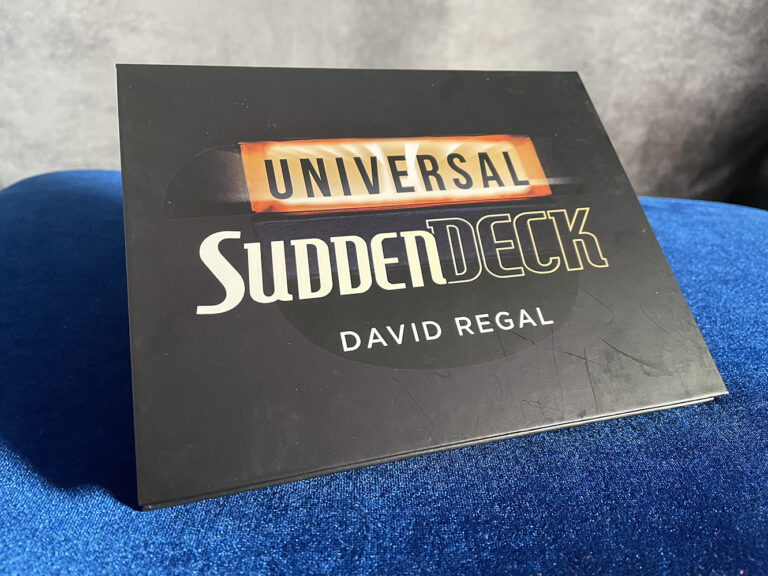 In cooperation with Penguin Magic I have now manufactured “Universal Sudden Deck”. That’s my effect where a disassembled card box PRINTS ITSELF, then an ENTIRE DECK is magically produced from it. Three things make this version of Sudden Deck unique:

1) The gimmick can now be ANY BACK DESIGN as it is provided BLANK with adhesive strips – just cut up a card box of any design and apply it to the gimmick. I realized I needed to make Universal Sudden Deck as so many people now use decks with unusual back designs.

2) The Universal Sudden Deck gimmick is made from DURABLE SYNTHETIC MATERIAL as opposed to cardboard – it will last and last.

3) The gimmick has a slightly LARGER CAPACITY to allow for decks of different thicknesses. Did you think all decks were the same thickness? Nope.

I am happy to say I have seen Sudden Deck performed on television both in the USA and abroad on high-profile television shows, and even on STAGE at The Magic Castle (I use it in the close-up room).

To celebrate the release of Universal Sudden Deck, while I have supply I will include, FREE, one of my favorite packet effects OFF WITH HIS HEAD: Four blue-backed Kings are displayed. The spectator names a King and commands “Off with his head!” The named King’s back turns RED, and he is revealed to HAVE NO HEAD – there are actually head-shaped holes where the faces should be. This took some doing, as you might imagine.

Universal Sudden Deck plus FREE Off With His Head

I’m happy to say I have something special to offer you. Rather than make you wade through text, here’s a…

“Flight of Fancy,” from my book Close-up & Personal, is my favorite effect that utilizes gaffed decks. Penguin has an “ad…